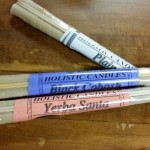 Ear candling is not a new alternative therapy… Dating back to the year 2500 B.C. there is evidence showing that people used and were familiar with the practice of ear candling.  Ancient cultures, including the Egyptians, made reference to its use. Parchment scrolls discovered in the Orient, also have described the procedure for ear candling, Through a process called “convection” softer waxes and toxins will be drawn out of the ear, oxidized and turned into vapors during the procedure.

Ear Cones are offered, when indicated, to balance and cleanses the ear/kidney systems. Ear cones are used to promote healing, relieve stress, and release blocked energy. Ear coning, also know has ear candling, is meant to be a soothing relaxing experience that is similar to aromatherapy.